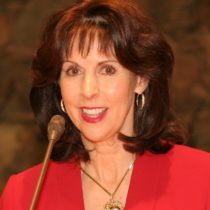 Laura Nielson Denke has lived a varied life. She has a B.A. degree in Theater Arts and Communications, and a master’s degree, in Marriage and Family Therapy. Mrs. Denke choreographed Summer Stock Theater as well as appeared as the lead in numerous musicals. She founded and directed the Seattle Children’s Ballet Company choreographing annually, “The Nutcracker Suite Ballet,” “Coppelia,” “Peter & the Wolf,” and others. She toured her ballet company in Europe performing in Spain & Portugal.

She founded the company, Victory Studios with her husband, Conrad W. Denke, for whom she wrote and directed “Adventures on Sinclair Island.” a local television show that was later translated and sold all over the world. She wrote and directed several video productions, winning national awards for her efforts. She served as the host of the television program, “Teens Talk,” which appeared locally in the greater Puget Sound area for four years.  Later it was syndicated and sold to cable stations throughout the United States.

Currently she holds the position of Executive Vice-president of Victory Studios. She is also a professional therapist with an office in Studio City, California. She specializes in pre-marital counseling and marriage counseling and is considered a relationship expert. She is a nationally licensed mental health counselor and licensed in the state of Washington and California as a Marriage and family Therapist.

Laura has a show on You-Tube called “Relationship Talk with Laura” featuring 16 shows that help improve communications in marriage. This program promotes knowledge to help audience members learn how to make wise and educated decisions in relationships.

Mrs. Denke is the author of three relationship books: Ten Secrets for Achieving a Successful Celestial Marriage, Before the Wedding and Don’t Get Engaged(until you read this book). and is a frequent guest speaker in Los Angeles and Seattle.

Mrs. Denke is known not only for her advice but also as a person who walks the talk. She has been married successfully for 40+ years, has two married children and five grandchildren..